No matter if you live in Las Vegas or you are visiting from a cooler climate, once the temperature gets over 100 degrees, it’s just plain hot. Think about opening the oven door when the cookies are done baking. That heat hitting your face? That’s outside. All of it. So basically your front door — or the exit of the hotel you’re staying at — is acting as your oven door and the Las Vegas valley is just one big convection oven whose sole purpose is to bake your ass.

With all of that said, you wouldn’t think I would be pumped to return to a place I once called home for a rapidly growing music festival called Life Is Beautiful. You would be wrong. Let’s sweat.

Knowing what a bitch Las Vegas traffic can be, I opted to purchase the 3-day $45 shuttle pass. You could choose various locations on the strip to be picked up and dropped off. I chose the Tropicana since my friends house was in the southwest part of town. Not only did they have ample shuttles (charter buses), but they also ran at least every 20 minutes if not quicker. The only gripe I have is that my shuttle driver on Friday night decided to take Las Vegas Blvd all the way from Fremont to Tropicana. If you are unfamiliar, just know that it turned a 15 minute trip into a 30+ minute trip.

Once I got down to the festival, I was a bit confused. I considered myself a somewhat level headed guy with a good amount of common sense, but I had to ask three different people where to pick up my media credential. Once I received my wristband, I made my way through the entrance and surprised to see only two entrances and exits and they were basically right next to each other. Perhaps another set at the other end of the park (by the Downtown Stage) would alleviate some of the heavy traffic near the south gates. 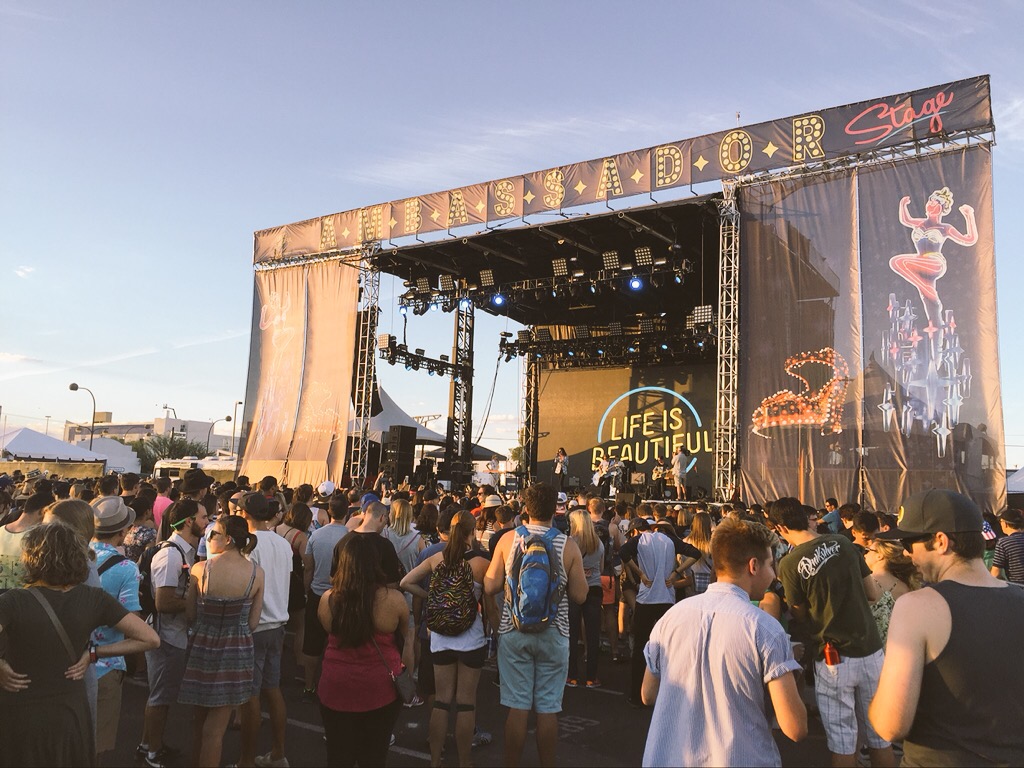 I read somewhere that 90,000 attended Life Is Beautiful. I don’t know if that is per day or total. Total would make sense since I didn’t have a problem getting a prime spot for any show I wanted to see. I started off my Friday by rolling up to BØRNS just as he was getting started. If it had been a show during the night, I may have enjoyed it slightly better (hot af). But even with the sweltering heat, BØRNS put on an energetic show and pleased the crowds with performances of “Electric Love” and “10,000 Emerald Pools” off his upcoming Dopamine LP.

My night was pretty much meant to stay at the Ambassador Stage. Coming up after BØRNS was electric violinist Lindsey Stirling and rap duo Atmosphere. The former I wanted to see at Bunbury Music Festival in June, but missed out, so I was pumped to see what her live show had to offer. Her mix of dancing and ripping shit on the violin is a thing of beauty. A highlight was her dancing in unison with a video behind her all while fire flew from her fingertips as she rosined up her bow. Here’s a short video of her performing one of her many hits, “Electric Daisy Violin.” I can’t recommend her enough if you get a chance to see her.

After Stirling was the rap duo Atmosphere. Admittedly, I don’t know a lot of their stuff, but that hasn’t stopped me from seeing them twice this summer. If that’s not a testament to their live show and stage presence, then I don’t know what is. Still, though, I don’t find myself searching Spotify for their stuff like I have other artists. I don’t know what my hangup is.

The last show I saw at Ambassador on Friday was Twenty One Pilots. This was the third time I’d seen them this summer and you know what? It doesn’t matter in the absolute least. No matter if you’ve seen them once or one hundred times, these two Columbus, Ohio natives will rip your face off and feed it to you. From back flips off the piano by Joshua Duns and lead singer Tyler Joseph climbing the speakers, there is never a dull moment at a Pilots show. They finished their set with “Trees” in which they put platforms with floor tom drums on them onto the crowd. They then hoist themselves onto the platforms and complete the song with everyone singing along. It really can’t be put into words, it’s just something you have to experience. Here’s a good recap of their performance.

I rounded out the first day of Life Is Beautiful by heading over to the Troubadour stage to see Robin Schulz, who’s brand new album Sugar just so happened to drop the very same day. Fortunately for me (unfortunate for Robin?), the place was maybe half full. I can only attribute that to the scores of people piling up to see Major Lazer (saw them for a bit, Diplo is crazy with that blow up ball) that would start half way through Schulz’s set. He was a victim of scheduling. It happens. But I stuck around long enough to hear him rip it and to see one kid tweaked out just staring at his friends blinking gloves. Gotta love EDM.

I didn’t make it into the festival on Saturday for reasons beyond my control. Go Bucks.

On Sunday, I made quick work of the festival. On the docket were Walk The Moon, Halsey, Run The Jewels and Kygo. Walk The Moon came out with the same intensity that Twenty One Pilots did and, thank God for clouds, it wasn’t nearly as hot as on Friday. The ended their set with favorites “Shut Up And Dance With Me” and “Anna Sun.” Both songs will never get old.

Halsey — who just turned 21, HBD — is for some an unknown up and comer. For others, they can recite her songs “New Americana” and “Colors” like they are age old classics. She did not disappoint in the least and even gave one lucky fan her first kiss. You read that right.

Run The Jewels is a lot like Atmosphere for me. I’ve seen them a few times and every time Killer Mike and El-P just crush it. This time around, they brought out Atlanta’s own Gangsta Boo who had a very, very, very descriptive way of talking about her love life. Like, I’m scarred. 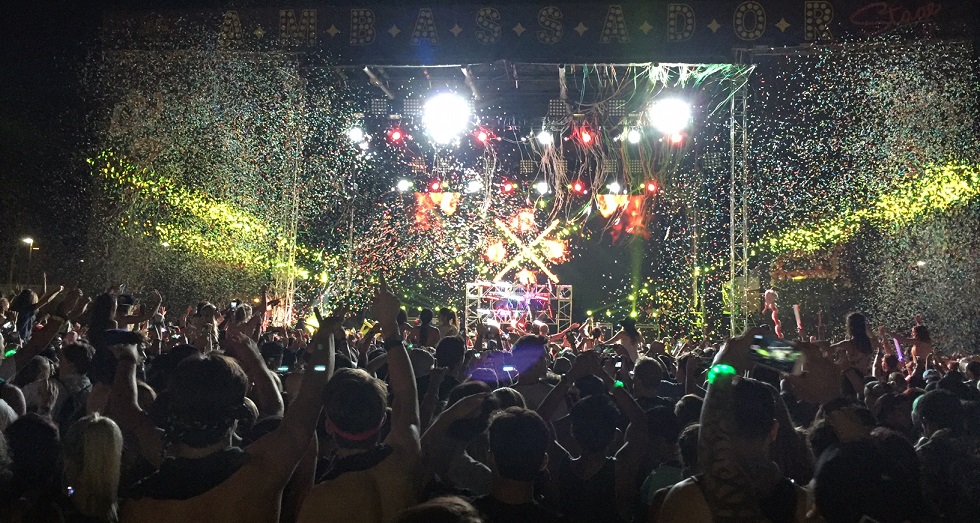 Finishing off my weekend (I was tired, Kendrick Lamar fans — and I’ve seen him) was Norwegian music producer Kygo. Kygo’s smooth tropical house will bring out even the biggest proponent of EDM. His remixes of “Sexual Healing” and “Don’t Stop Believing” had every ass moving in Las Vegas. His sound was perfect, too. As I was leaving I could hear people stopping at the sound tent to compliment his crew. I’ve never seen that before. His remix of Seinabo Sey’s “Younger” was the tits as well.

Besides some really big douche bags at the Ambassador Stage, I would say the security did it’s job rather seamlessly. There was some trouble getting medics for people that let the party get the best of them, but overall I would say they did a pretty good job. 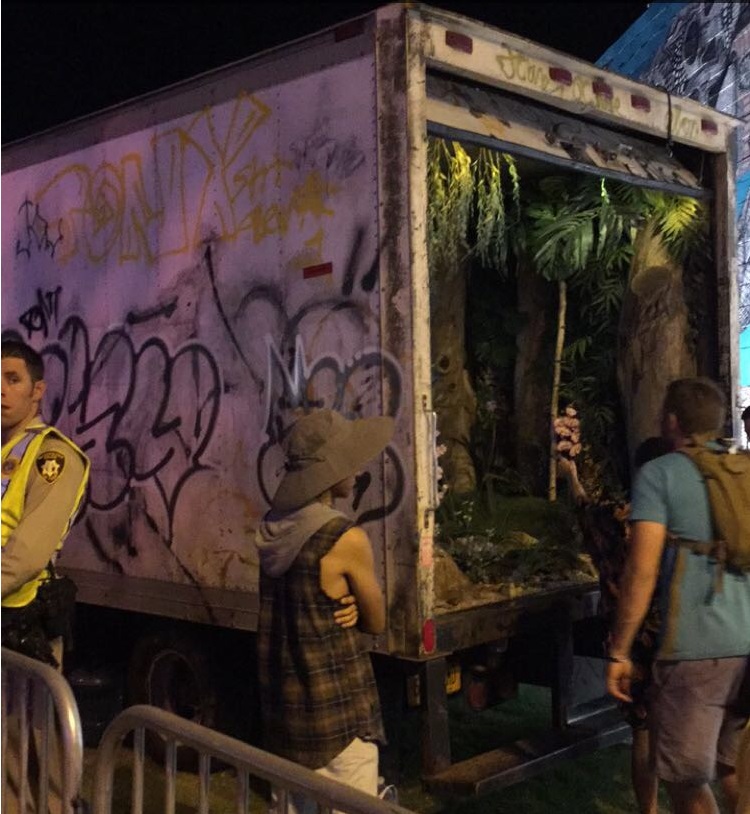 The crowds were a very eclectic mix. For instance, I saw a kid with a Bishop Gorman High School back pack on and at the next show, I was standing next to a man that wasn’t a day younger than 60. And let me tell you, my man rocked the f*ck out to some Atmosphere.

The art exhibits, though, were probably the biggest surprise of the weekend for me. They transformed almost every building in the 10+ blocks the festival covered. They even brought in some exhibits, like Banky’s Box Truck. It was pretty heavily guarded and only a few people go check it out at a time, but it was still pretty awesome to see live as a fan. 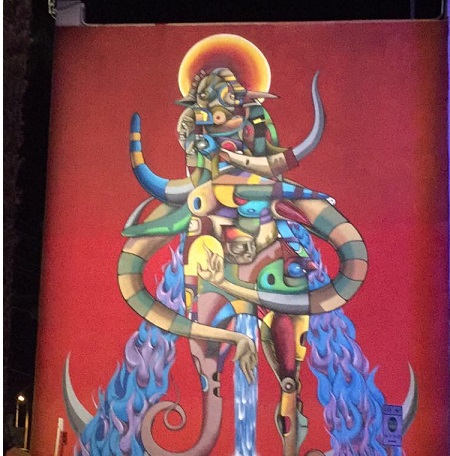 Throw in the reasonably priced drinks and absolutely any kind of food you could possibly want, and this festival really had it all. One suggestion, though, would be to move it back to the end of October. It was held later in the fall in previous years and hasn’t been quite as hot as the end of September.

However, with the word spreading about Life Is Beautiful, it really won’t matter when they hold. People will still make their pilgrimage to the desert.