The Sixth Anniversary of the Virginia Tech Massacre

…When I got to my house after what seemed like the longest ride home from work ever, I ran inside and sat down and began to watch the news unfold. I went to my computer and started to send out messages to people I knew at Virginia Tech to make sure they and others were alright. Fortunately, my friend Danni was not there at the time of the incident. I did get a response from someone else that day and she assured me though scared, everyone else was alright. She said she didn’t know what to do and that most of her friends were accounted for but she was waiting to her from a few more. I was at a slight ease for the moment but still kind of in shock. The footage they were showing on the news was from places I had been just months prior. From where I was sitting I was scared, I can’t imagine the trauma that students on that campus had to go through. The way the students, faculty, staff and town held together in the aftermath is a true testament of the human spirit and will…

That was an excerpt from a post I had written three years ago today.  I assure you, although writing with a heavy heart three years ago, I don’t know if it would be as heavy as it is today.  In the wake of the bombings during the Boston Marathon, it is easy for a lot of people to overlook the anniversary of one of the deadliest shooting rampages in history.  Thirty-two victims lost their lives that day and the gunman ended up turning the gun on himself.

At 9:43am this morning, there was a state-wide moment of silence observed for those who lost their battle that day.  Also, there was a ceremony candle lit last night at midnight and it will burn for 24-hours in remembrance. 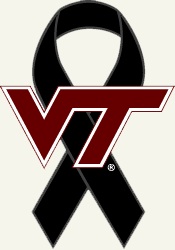 I did not go to Virginia Tech and I’m not from, nor have I ever been to, Boston.  But I am a human being and the pure horror I felt while learning of both of these tragedies is really immeasurable.  I  guess in a way I am posting this just to remind everyone about that tragic day six years ago.