Video from Inside the Pontiac Silverdome Looks Post Apocalyptic

In 1975, the Pontiac Silverdome opened it’s doors to the fans of the Detroit Lions. At the time, the stadium was the biggest in NFL with a capacity of 80,311. It was built in nearby Pontiac (duh?), Michigan and took only about 23 months to finish. The dome even saw the first Super Bowl in a northern city when the San Francisco 49ers took on the Cincinnati Bengals in Super Bowl XVI. 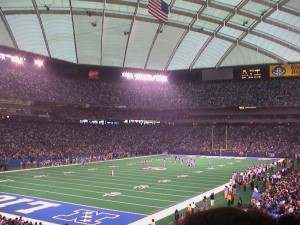 The Silverdome was abandoned by the Lions after the 2002 season and has since sat empty. In fact, for the last 15 months or so, it has sit without a roof, exposed to the harsh climate.

It was sold in 2009 to investor Andreas Apostolopoulos, who had plans of making it an event center that could host concerts and other large venues. He was to install a permanent roof in 2013…and we all see how well that panned out.

Check out the video below to see what remains of Barry Sanders’ Graceland.