I remember when I was 22.  I was in my last year of college, the easy year.  I was coasting through classes and pulling the grades I needed to help salvage what was left of my GPA from partying in the years prior.  I lived with two of my best friends who will not hesitate to tell you a “DiLo Story” from our college years.  It was the time of my life and I will never forget it.

Nicholas Kimmel is 22 years old now too and he too should be enjoying the same shenanigans that I was afforded.  But after high school, instead of enrolling at Arizona State to play baseball on a partial scholarship, Nick did what many of us don’t have the guts to do.  He enlisted in the Marines.  It was during Kimmel’s second tour in Afghanistan that an IED would change his life forever.  The roadside bomb took both of Nick’s legs and his left arm.  It is a miracle that Nick survived the blast.

Nick lives back in San Diego now where he takes in the game at Petco Park, home of the San Diego Padres.  The Padres are fans of Nick’s as well and have given him season tickets and an open door policy on batting practice so he can enjoy the game he loves whenever he wants.  The Purple Heart recipient missed only 10 games last season, which is rather impressive since some of the players don’t even make that many games.

While in San Diego, Nick was selected as one of 25 wounded Marines to head to Arizona training camp to participate in Barry Zito’s Strikeouts for Troops Foundation event.  It was there that Zito and Kimmel formed a solid friendship.  Zito kept up on Nick’s progress and they exchanged numbers.  Since then, Nick has added Mark Kotsay, Brad Ziegler and Jake Peavy to his text messages to Zito.

On Thursday night, before a packed house at AT&T Park, Nick Kimmel walked out to the infield, without assistance, but with his good buddy behind him.  Along with Zito was Giants legend Willie Mays, who like the other 40,000 or so people in attendance, was in awe of Kimmel.  Nick then got himself set, gave Zito his cane and then fired a strike to the first pitch catcher, reliever Sergio Romo. 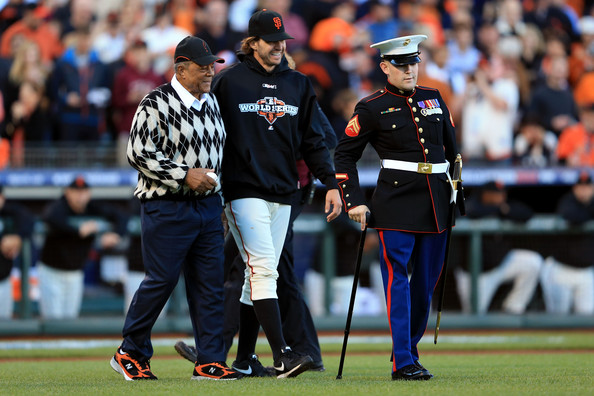 It is truly amazing what Nick, what all of our soldiers, have been through.  The thought of going to fight in the war scares the shit out me.  The men and women serving our country have every ounce of my respect and my admiration.

Thanks for doing what I couldn’t.  Thanks for being a hero.