Thunder Treats at the NFL Hall of Fame Game

Every year, like so many Americans, I am supremely excited for the idea of the football to come back. Not only for the game, but for the online football betting that goes with it. I look toward the NFL Hall of Fame Game as the chance for a taste of the sweet nectar that is football.  And like every year, I am supremely bored by the middle of the first quarter after all the starters (the ones who actually play) are benched in favor of other players trying to make the team. 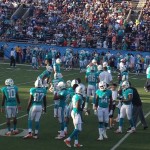 This year was a bit different, though.  The Monk had tickets for me, DiNunz and Papa DiNunz to go up to the game and check out the experience first hand. DiNunz and Papa DiNunz were more invested than Monk and I because they are Miami Dolphins fans.  So if nothing else, they got to check out the new uniforms to which Papa DiNunz had this to say: “looks like there is a dead salamander on their helmet”.  For me though, the pros and cons of the experience are pretty much dead even, so I would have to say yeah, it was a good time and it was a good experience. 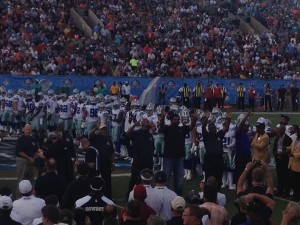 The festivities besides the game, the pregame and halftime show, were interesting too.  Pregame had the team introductions after which they took position on both 45 yard lines, facing each other. Then the 2013 Hall of Fame class was announced one by one and they came down the 50 yard line while both teams clapped. It was probably a special moment for them, I’m guessing. Also, Jonathon Ogden was still the largest human in attendance.

The halftime show was something interesting.  Big Monk told me that the Jackson High School Polar Bear Band was playing.  I made him repeat.  Yes, he did say Polar Bear and I already know what you’re thinking and you are correct. It definitely looked like Will Ferrell dressed up as a Cougar from Old School dancing around on the field.  Good songs from a pretty large band and good fireworks at the end.  The performance may be getting a better review since I was able to stand and relieve my back/ass from the damage the bleachers were causing.  Either way, thumbs up from me.

We left the game near the end of the third quarter after the Cowboys shut down the Dolphins on a 4th and short attempt. To be honest I still don’t know what the final score was because who cares? The score doesn’t matter, the fact that football is getting closer and closer by the day does.  Hang in there guys, we’re almost there.