Randall Cunningham Jr. Already Has Four Scholarship Offers, Has Yet to Make His First Start

Randall Cunningham was an absolute beast on the football field.  Not only was he an All American quarterback for the UNLV Running Rebels, but he was also their All American punter.  That’s right.  All-American, in the same season, at two different positions.  Moving on after college, Randall Cunningham went to the Philadelphia Eagles where he became one of the forefathers of the “duel threat” quarterback.  As you can imagine, any son of Cunningham would have to inherit some of that talent, right?  Well, at least four colleges are banking on that idea as of right now.

Randall Cunningham Jr. is clearly cut from the same cloth as his father.  Junior is 6’5″, 185 lbs and according to Pops, he looks the same as he did in high school…only faster.  Now he is ready to show off that speed as he takes over the reigns at national powerhouse Bishop Gorman High School in Nevada.  You read that right, he has been either on junior varsity or a back up ever since joining the Gaels in 2011.  But it isn’t for lack of effort.  His predecessor, Anu Solomon, is headed to Arizona where he will almost assuredly make an immediate impact.  While Solomon is throwing the ball all over the PAC-12, Cunningham will have his work cut out for him.  To reach the yearly averages that Solomon put up at Gorman, he would have to throw for 2,500 yards, 34 (!) TDs while only throwing 4 picks. 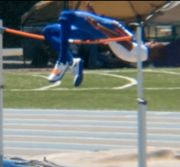 Those are some Shaq sized shoes to fill, but if there is anyone capable of doing it, it is this duel threat young man.  Actually, perhaps we can call him a triple threat because he recently broke the national high school high jump record with a jump of 7′-1″.  Not a typo.

So is all of that enough to merit a scholarship offer?  Is lineage and DNA mixed with pure talent, size and speed enough to get the top colleges in the nation’s attention?  Sure is.  So far, according to Rivals and the Las Vegas Sun, Randall II is entertaining offers from Syracuse, Mississippi State, Baylor and of course, UNLV.  You can bet that once the season starts and Randall II gets going, more offers will be rolling in.

But, if football doesn’t work out for the young Cunningham, there is always track and field.  He has an offer right now from UCLA to bring his  7′-1″ high jump to Southern California.

In addition to the exciting news for junior, Randall senior has been nominated for the College Football Hall of Fame for the 8th year.

Hopefully this is the Cunningham’s year.