UPDATED: OSU RB Carlos Hyde Could Be Dismissed for Punching a Girl

The rumor mill was fast spinning yesterday as news broke out of Columbus that star running back for Ohio State, Carlos Hyde, had been dismissed from the team after an altercation with a woman.  That altercation was later revealed to actually be Hyde punching a woman in the face.

Columbus is buzzin this morning trying to confirm incident involving #ohiostate running back Carlos Hyde. He could be in a LOT of trouble.

And then it got much, much worse.

As if that wasn’t enough, Twitter is now saying that the woman he punched in the face was actually a policeman’s daughter.  However, most are claiming that the Columbus Police Department has not filed any charges against Hyde, which is why you haven’t seen anything on it. Also, numerous attempts to contact the CPD about the situation have yeilded no results.  In fact, only one person on Twitter claims to have insider information.

Carlos Hyde is definitely gone from OSU team. The dumbass punched a CPD officers daughter in the face and knocked her out. I confirmed cont — Casey (@Death_Apollo) July 22, 2013

With a friend of mine who is in the CPD. WTF was Hyde doing. My friend said he had not been charged or arrested yet. What a FN toolbag. — Casey (@Death_Apollo) July 22, 2013

Whether or not you can believe Casey is up to you, but he has relentlessly defended his “source” throughout this morning.  And really, how hard is it to believe he has a friend/acquaintance that is a Columbus Police Officer?  We all have friends that may find themselves in the “informant” role at some point.  In fact, I am working this morning to get some news from one of my mine.  I will update with anything I find out as soon as I get it.

Player lot was full at Woody Hayes this morning before 7. Players started leaving around 7:40 a.m. Should be some news from OSU later today — Doug Lesmerises (@PDBuckeyes) July 22, 2013

Hope this is all just a big misunderstanding, but with the team meeting and Ohio State’s plans to discuss a “weekend incident”, the future is not looking very bright for Carlos Hyde.

Eleven Warriors has posted a police report that names Carlos Hyde as the suspect in a an assault on a woman.

Victim stated on listed date and time at the listed location she was assaulted by the described suspect. Victim stated she does not know the suspect but stated she could identify him. 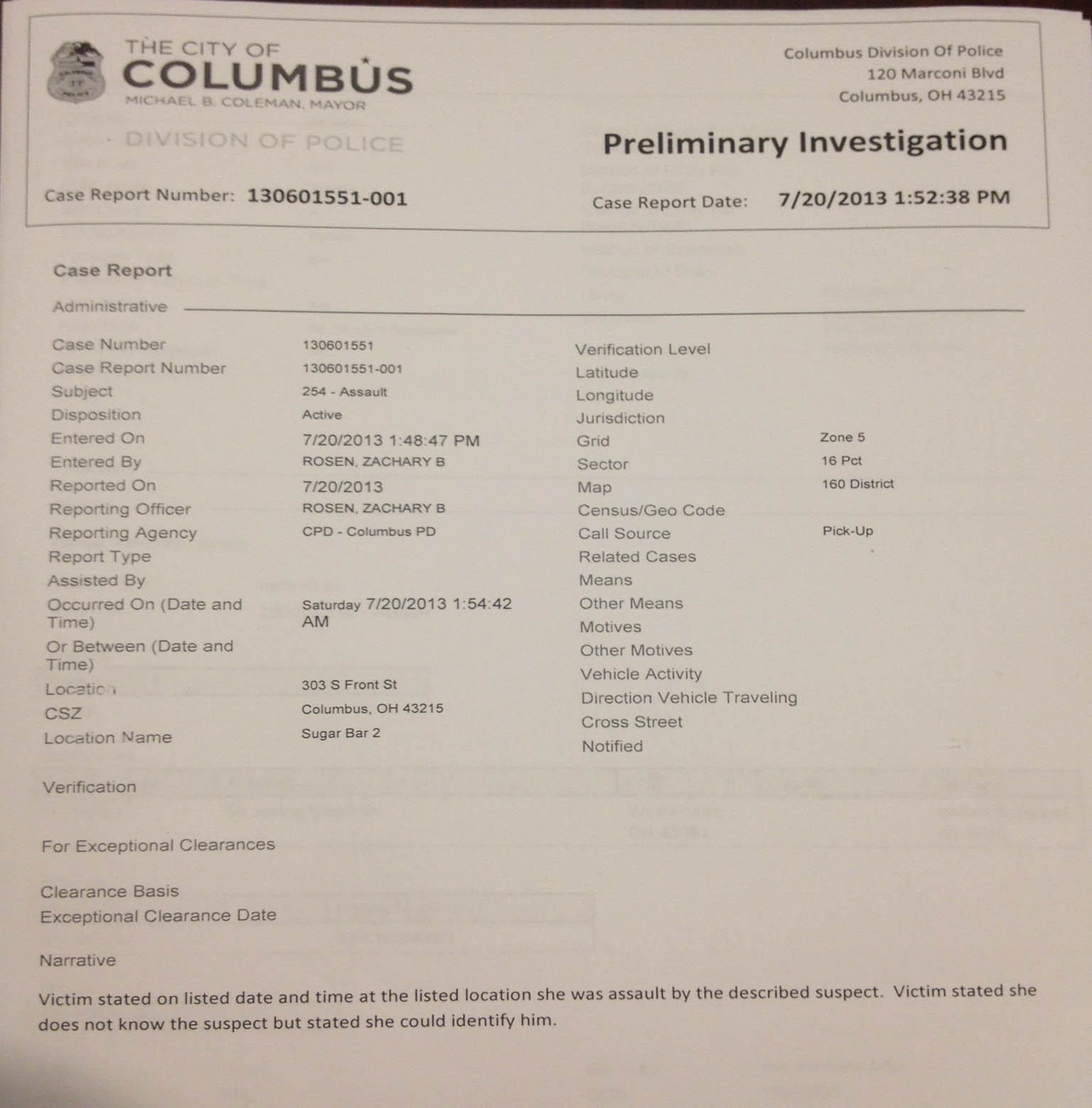 During a direct message conversation with the victim’s roommate, we find out that Carlos Hyde was the alleged aggressor who punched the victim in the face after she refused to dance with him.  He then ran off and people in the club confirmed it was Hyde.  She is pressing charges and has collected witness statements from others in attendance.  Like we said before, the victim’s father is a police officer, but we now find out that he is also a soldier on a tour of duty in Afghanistan…

TE Marcus Baugh and DL Tim Gardner also recieved disciplinary action after getting themselves into trouble over the past week as well.  Baugh has been removed from all team activities and will miss the first game of the season after getting arrested for underage possession and having a fake I.D.  Gardner has been removed from the 2013 team after being charged with obstruction of justice on Saturday night.