Unless Mike Wallace suffers from the worst possible case of bad timing in the history of possible cases of bad timing, his tweet earlier today looks like he had the most insincere reaction to Washington Wizards Jason Collins announcing he was gay.  Even if it was just bad timing, it still doesn’t excuse the tweet.

He needs to realize the influential position he is in and that he is representing an organization and not just himself.  More so, the millions of fans he has accrued while en route to Miami.  If you listen closely, you can hear a slight thumping sound.  You know what that is?

Dolphins publicists beating their heads off their desk. 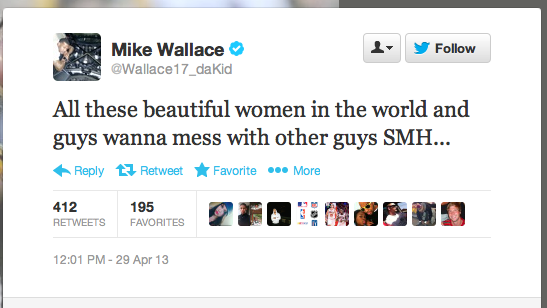 Collins, the first active pro-athlete to come out, announced his secret in the new Sports Illustrated on news stands May 6th.

I didn’t set out to be the first openly gay athlete playing in a major American team sport. But since I am, I’m happy to start the conversation.

Mike Wallace has since apologized for the ignorant tweet…sort of.