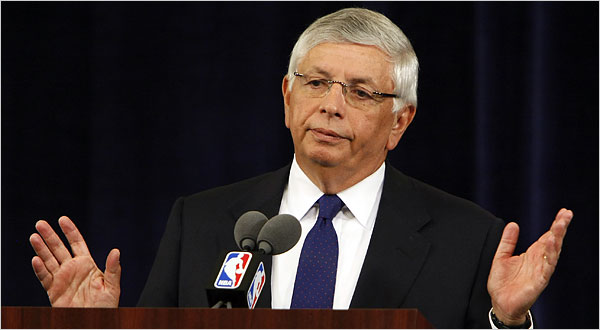 The NBA’s never-ending quest to make LeBron James feel unappreciated in Cleveland, so that he might someday seek greener pastures in the Big Apple, has taken on an entirely different twist. The first injustice was inflicted upon Mo Williams not once, but twice, while the second was the demotion of perhaps the greatest regular season performance of LBJ’s already illustrious career, which can no longer be called a triple-double. David Stern is responsible for both acts, and I only wish I could find his phone number.

I was pretty upset when Mo Williams was not selected to his first all-star game in Phoenix. Anyone that has followed the Cavaliers this season, and particularly in comparison to their past couple seasons, has noticed the immediate impact that Mo has made on the hardwood. The guy is a playmaker from baseline to baseline, and has even shrugged off past notions of not playing much D since joining Mike Brown & Co. But even for casual NBA fans who don’t get to watch the Cavs much, it’s plain to see just how great of an impact he’s made. Consider that Mo was the only significant addition to the Cavs over the summer, and this move (incredible work, Bob Zampini) has the Cavs 20, repeat 20, games ahead of last season’s pace. Yet as soon as undeserving Allen Iverson was shamelessly voted into the all-star games by the fans, it was pretty clear that there weren’t enough guard spots to go around. Jameer Nelson seemed to have a spot locked up, but Devin Harris? No way he should be in ahead of Mo, especially with the overall record that the Cavs have in comparison to the Nets.
Then, several days later, Jameer Nelson goes down in a heap with a torn labrum. Articles sprang up around the web about Mo getting the all-star nod the he so rightly deserved in the first place, but Noooooooooo. David Stern decided to anoint Ray Allen to his ninth all-star bid ahead of Williams, thus solidifying that the Cavs get no respect from the NBA. None. Don’t get me wrong, Ray Ray is a great player, and along with Jason Kapono maybe the best pure shooter in the game today. But the guy’s averaging 18.1 points, 3.4 rebounds, and 2.8 assists per game, while Mo has put up 17.1 points, 3.3 rebounds, 0.8 steals, and 4.2 assists per game. They’re almost even numbers to compare, but David Stern had to make a choice. Naturally, he took the more popular and celebrated player, meaning the Celtics and Magic each have 3 players heading to Phoenix, while LeBron, Mike Brown, and the Cavs, who currently hold the best winning percentage in the East at 39-9, only have one.
Courtesy of Brian Windhorst (who rocks) of the Plain Dealer: “Ben Wallace was right when he called Mo originally being passed over for the All-Star Game a ‘shamockery,’ ” said Cavaliers owner Daniel Gilbert in an e-mailed statement. “But not naming him as the natural and obvious replacement for the unfortunately injured Jameer Nelson is stupidiculous, idillogical and preposterageous.” Couldn’t have said it any better myself.

One day later, and my anger has transitioned into astonishment and almost laughter. David Stern had the audacity to downgrade LeBron’s historic Wednesday night performance at the garden by taking away a rebound in the late stages of the 4th quarter. Instead of being the first player since Kareem back in 1974 to score 50 during a triple-double performance, he has now been relegated to just another incredible game, but that simply doesn’t do it, or him, justice. He was flat out phenomenal against the Knicks, but the game has now lost quite a bit of historic relevance. It also seems like a direct retaliation from Stern and the NBA league office over the critical remarks that the Dan Gilbert, Danny Ferry, LeBron and other Cavs players made surrounding Mo’s all-star snub. On top of that, why would it take 2 days to change the call of one rebound?!
Is it all just a conspiracy to get LeBron out of Cleveland in 2 years? I’d be lying if I said I didn’t think so. David Stern wants LBJ to feel unappreciated in Ohio, so that he’ll give serious consideration to departing for glamorous NYC and Madison Square Garden. There’s no other way to justify his actions in back-to-back days. I think it would be incredible if LeBron told Mike Brown that he wasn’t feeling well, and didn’t think he should participate in the all-star game itself. Knowing how much LeBron loves the spotlight, however, I highly doubt it would happen. But it sure would prove a great point to David Stern, and hit him where it hurts the most…his genitals.
While I’m fairly distraught by these developments, I can at least take solace in the fact that LeBron, Mo, and the rest of the Cavs organization are furious. And if there’s one thing we’ve learned the last several seasons, a furious LeBron is the best kind. I hope the Cavs destroy Kobe and the Lakers Sunday afternoon, and then continue to use this motivation all the way through the playoffs this June. This all seems to be eerily similar and reminiscent of Major League, wherein Rachel Phelps tried to do everything in her power to prevent Cleveland from winning. Well here’s hoping that there’s not a naked picture of the David Stern in the locker room, but rather that Zydrunas Ilgauskas will get the team together in the locker room Sunday and say, “Well I guess there’s only one thing left to do……”