Louisville’s Kevin Ware had one of the most gruesome injuries* I have ever seen in sports happen to him on Sunday evening during their Elite 8 match up against Duke at Lucas Oil Stadium in Indianapolis, Indiana.  With 6:33 seconds left in the first half, Ware jumped up to try to block a three-point attempt from Tyler Thorton.  He came down awkwardly, to say the least, on his right leg and it snapped in half just below the knee.

The injury happened directly in front of Ware’s teammates who all cringed and looked away in horror after seeing Ware’s injury.  Pitino and other players had tears in their eyes as they watched Ware in massive amounts of pain.  As guard Peyton Siva recalled, even during that excruciating moment, Kevin Ware wanted his team to be focused.

Watching the game, you could obviously tell how serious the injury was but it really hit when they showed Louisville head coach Rick Pitino wiping away tears from his face.  You realized how special their bond is and you could tell it was like it was one of Pitino’s children lying on the floor.

When something like this happens, it seems as though it would be nearly impossible to get the focus of your basketball team back.

Basically, the bone popped out of the skin. It broke in two spots. Remember the bone is six inches out of his leg, and all he’s yelling is ‘Win the game, win the game.’ I’ve never seen anything like that.

Win the game they did.  Louisville gathered itself after the accident and went on to beat Duke 85-63 and earn another trip to the Final Four.  Even sweeter this year because it is in Atlanta, where Kevin Ware is from. 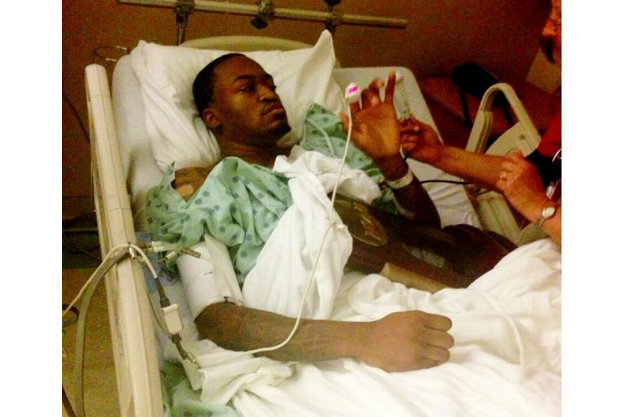 Not only did Louisville win and advance to the Final Four, they gained a ton of support from the nation as well.  After seeing what those kids had to go through with the loss of their teammate and the way they reacted in the face of adversity, it is extremely hard not to want them to continue their run.

Kevin Ware had surgery Sunday night where they reset his bones and inserted a metal rod into his tibia.  He is expected to make a full recovery and be in the hospital in Indianapolis until at least Tuesday.  After the game, his coaches brought him the NCAA Regional Trophy they had won hours earlier after his motivational words to his teammates.

Hopefully by next Monday, Kevin Ware is back on the court with his teammates covered in confetti and hoisting the National Championship trophy.

This time with tears of joy.

*Note: I’m not posting the video and I’m not linking to the video. If you want to see it that bad, use the Google machine.