The good Twitter is almost always balanced out with the bad Twitter. For instance, if you are on Twitter as much as I am, you will get your news faster than any website can update. You will be in the know at all times and probably learn a few things each day that you never did before. Unfortunately, that luxury comes at a price. Many of the more than 500 million Twitter users are what the internets like to call “trolls”. They comment on a person or subject in order to garner a response or spark controversy. Sometimes, it is more than that, though. Sometimes their Tweets are born from hate.

I can’t say for sure which category this instance falls under, but either way it is pretty awful. Especially since I am an alum of Kent State University.

KSU wrestler Sam Wheeler took to Twitter on Monday to air his distaste for ESPN’s SportsCenter. The “problem” Wheeler was having was that all the reporting done on the show was going to be about Michael Sam.

For the few that don’t know, former Missouri football player Michael Sam announced he was gay this weekend and will enter the draft in April. There is a great chance that he will become the first openly gay active NFL player. The University as well as the football community as a whole, have been largely supportive of Sam. Some, though, haven’t been as enthused.

“I can’t even watch sportcenter today cause all there talking about is Marcus Smart or that fag from mizzou….” 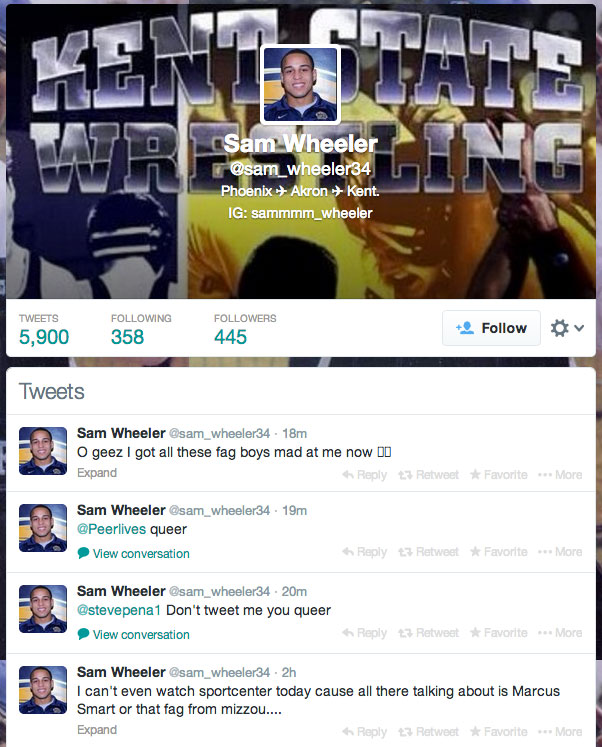 That Tweet from Sam Wheeler would cause some uproar and people to lash back at him, to which he would simply respond “Queer”. Classy guy.

Kent State University was contacted directly by a KSU Alum on Twitter that saw what was transpiring. Both Athletic Director Joel Nielsen and Head Wrestling Coach Jim Andrassy have released statements regarding the incident and Andrassy has suspended Wheeler indefinitely.

“We are aware of the insensitive tweets by one of our student athletes.  On behalf of Kent State University, we consider these comments to be ignorant and not indicative of the beliefs held by our university community as a whole.  This is an educational opportunity for all of our student-athletes.”

“As an alum of Kent State University and as Sam’s head coach, I was surprised and offended by what I read on Twitter. I have spoken to Sam personally, and while he is remorseful, he will be suspended indefinitely while we determine the best course of action moving forward.”

The swift action and efforts by Kent State University regarding Sam Wheeler should be applauded. They made the right decision in suspended one of their best wrestlers, showing that no matter how well you do in your respective sport, you will be punished for being an ignorant asshole.