Ken Griffey Jr. and Alex Rodriguez Lost to a Starving David Ortiz During an Impromptu Home Run Derby in 1996

How many times have you and your family went to a Minor League Baseball game?  You can probably count on one hand.  I, myself, have been to quite a bit of them.  Of course, that is mainly because I used to live in Las Vegas, Nevada and there were no pro sports teams to see.  So really, our options were kind of limited in that department.  The minor league teams became our teams.  Not to the point of following stats daily, but enough so that I would defend them in a full fledged screaming match in a bar.

If you have the chance to go see a Minor League game near you, I urge you to do it. The young talent that you are watching may very well rule the Major leagues. Major League scouts are taking notice when considering their future roster as are sportsbooks when compiling MLB betting lines for their futures odds. I’ve seen C.C. Sabathia in Single-A short season and I got the opportunity to watch Bryce Harper when he was 16 years old.  The latter might not be the same, but you get the idea.

The video below is via Craig Calcaterra over at NBC’s Hardball Talk.  He posted it today and I have to say it was absolutely refreshing to read something on that site that didn’t have to do with steroids in baseball.  While the video didn’t have anything to do with steroids, on the surface at least, it did involve everyone’s punching bag, Alex Rodriguez. 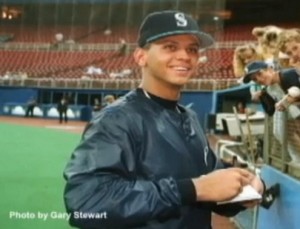 In addition to A-Rod, this video from 1996 also featured his teammate and future Hall of Famer Ken Griffey Jr.  The Mariners were one of the hottest teams in baseball at that time and they had two of the biggest stars on their team.  The organization decided to do a barnstorming trip where the big league team would travel around and play minor league teams to make some money for the organizations.

Interesting theory, but I probably wouldn’t let my stars play.

Anyway, the Mariners end up in Wisconsin for a game with the Timber Rattlers.  Unfortunately, the weather didn’t cooperate and Lou Pinella didn’t want his team to play.  What ended up happening instead is truly awesome to see.

And incredibly skinny David Ortiz was thrown into an impromptu home run derby against two of the biggest names in baseball and absolutely dominated them, leading Alex Rodiguez to proclaim “I ain’t got a chance”.

Of course, because this is baseball, the author had to get that jab in about steroids at the very end.