DJ Fluker almost made it to Draft Day without making an asshole of himself.

As fast as this news was breaking, DJ Fluker was claiming his account was hacked.  At some point these players will realize that what they put on Twitter WILL come back to them 100 percent of the time.  Until that epiphany comes along, we will continue to be entertained by the stupidity of the student athlete.  In this edition of the stupid athlete, DJ Fluker shows exactly what you shouldn’t tweet ever, even if it is a joke. 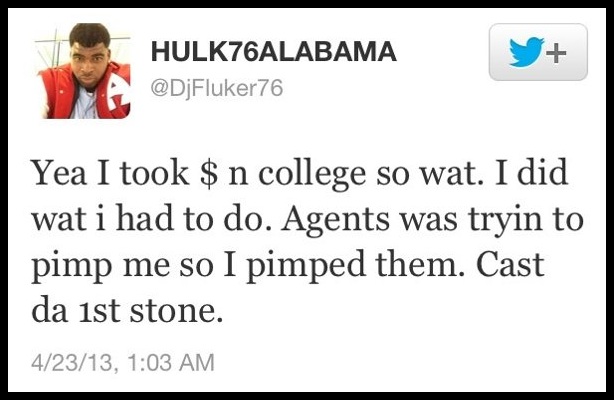 Fluker deleted the tweet almost immediately after he posted it.  However, regardless if Fluker says he was joking, I’m sure the higher-ups at the NCAA will be looking into this.  In anything, Auburn fans are sure to be rejoicing and throwing all the jokes right back at Alabama.

Fluker’s agent Deryk Gilmore, who I’m assuming didn’t pay him while he was in college, sent out an expected tweet to try and put out the fire before it spread.

Of course his account could have gotten hacked, but what fun is that?