Jason Kipnis has become a huge fan favorite in Cleveland.  He is always out signing autographs and it always seems he is making himself available to the fans.  Kipnis is a player that gets it.  Just watch this video and tell me you aren’t a Jason Kipnis fan (and Vinnie Pestano) afterwards.  Not only he is popular with the Indians fan base, but he is popular on Twitter as well and always retweeting, and tweeting to, his followers.

Well tonight, Kipnis retweeted one fan who had stolen his phone number.  The fan, @A_Hoff_Aholic, just texted Kipnis to tell him that he was a big fan…and that he lifted his number off his golf bag when he was at Progressive Field.  In true Kipnis fashion, he brushed it off and re-posted the picture. 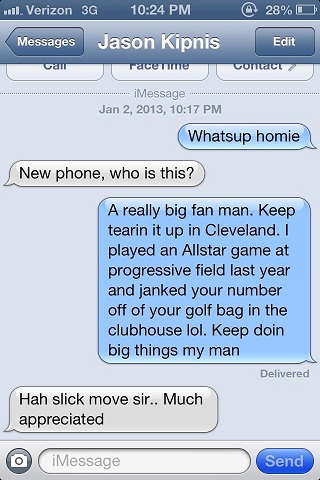 Looking at @A_Hoff_Aholic’s timeline, it seems as though he is getting some negative reaction from the fans.  Personally, I think this is funny as hell.  It’s not like he is tweeting out the number or doing anything malicious.  Just having some fun and clearly, Jason Kipnis gets that.

People need to lighten up.