We were at the Pittsburgh Steelers vs Miami Dolphins game this past Sunday and I got to see first hand the reaction from both Dolphins fans when they thought they lost, Steelers fans when they thought they had tied the game with no time left, Dolphins fans who then found out they had won and Steelers fans who learned that Antonio Brown had stepped his fat foot on the out of bounds line before hitting the endzone.

As a Browns fan, it was pretty funny to watch the Steelers fans go bananas when they found out they lost.

One fan in particular probably hates Antonio Brown more than any Steelers fan.  We don’t know much about said fan, including who they root for or their gender, but we do know that they are pretty good at picking winners.

They posted their betting tickets from the Silver Sevens casino in Vegas where they put two $5.00 bets down to win $99,225.00 on each ticket. All they had to do was pick 15 games correctly on one ticket and they would be winners. Ah, the sweet and simple beauty of the 15-game parlay cards. It is a cheap and effective way to make every NFL game count week in and week out. Bonus for you if you have the NFL RedZone channel, which I’m sure creates a deadly cocktail when coupled with a parlay card. 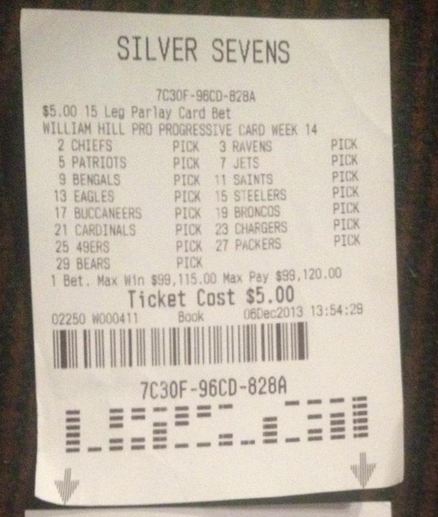 The unnamed person was pretty smart about their betting. Since it was a parlay card, they didn’t have to pick against the spread for each game, rather they just had to pick the winner. Sounds easy right? But 15 times in a row? Tough stuff. So they filled out their first card and picked the Bears to win on Monday night. Sites like SportsBettingOnline.ag had the Bears as a 1.5 favorite in that game and apparently that was too close for comfort for the bettor.

They decided to fill out another card with all the same teams selected, but this time they selected the Cowboys on Monday Night, getting the 1.5 points, thus ensuring that if Antonio Brown wouldn’t have stepped out of bounds on Sunday afternoon, they would have won almost 100 G’s (assuming they didn’t tie on Monday Night). 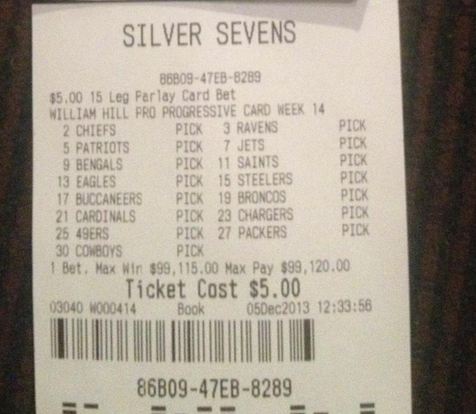 Side note to the bettor: You could have saved $5.00 by not betting on the Cowboys. It’s Decemeber and Tony Romo is their quarterback, I think we all knew how this one was ending.