Davone Bess Posts Pictures of a Blunt and Weed on Twitter, Hack claim in 3, 2, 1…

Cleveland Browns wide receiver Davone Bess, aka Jah Ras Tafa, is having a heck of a Thursday. Despite not being able to catch much this season, he should have no problem catching some heat for the picture he posted to his Twitter account early this morning.  Bess seems to be channeling his inner Bob Marley, posting more than one picture of a lion and rocking some red, green and yellow garb. The picture that might get him into some heat, though, would be the one above (bigger below) with a half smoked blunt, a small pile of what looks to be Kush and another baggy of the same. I’m guessing it is Kush based on past Tweets like this one: 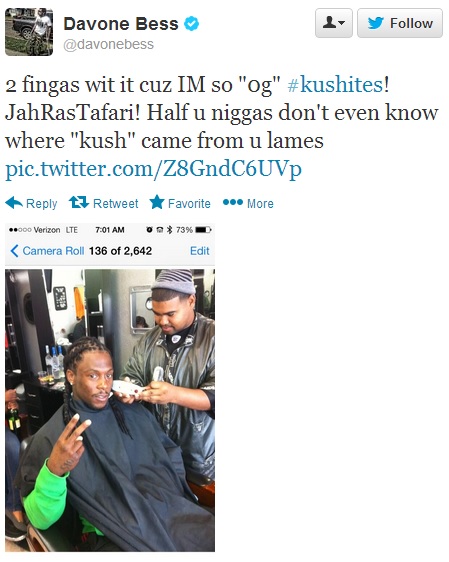 Oh and I must add that Ang and Will’s wedding favor wine glass was a thoughtful gift. I’m sure we will hear before the end of the day that Bess’ account was hacked.  That is fine, but it will be a hard sell since he posted pictures of himself after posting the marijuana picture.