When It Comes to Money & Power, the NCAA Protects Its Own

Johnny Manziel* has decided what everyone pretty much knew. He will enter the 2014 NFL Draft and LRMR will represent his marketing/branding and Select Sports Group will be his agent.

Oh, what’s that you say? You claim you didn’t know those agencies were going to represent him? You must work for the NCAA Compliance Department.

Before the 2013 football season, the college football world was on the edge of their seats as they waited to hear what the NCAA was going to do with their beloved Johnny Manziel. He had been under investigation by the NCAA to determine whether or not he made a profit for autographs he signed. Obviously, accepting money is a big no-no from the higher ups and Johnny Football’s season was hanging in the balance.

There were a lot of claims about what transpired. Some of the claims were very similar to claims made by multiple memorabilia dealers that Johnny Football had indeed signed items for them and they did pay him for doing so. ESPN’s Outside the Lines also reported that Miami autograph broker Drew Tieman had Manziel sign over 1,000 items and told ESPN’s Joe Schad he ended up paying Manziel $7,500 for his services.

ESPN senior writer Wright Thompson wrote a cover story that outlined who was in charge of the Johnny Football autograph empire.  This is when the world got to know “Uncle Nate”, Manziel’s friend who dropped out of college to basically be, as Thompson put it, Johnny Manziel’s Turtle. He went on to describe Uncle Nate as Manziel’s assistant, media coordinator, business manager and even designated driver.

Somehow, even if it seemed like a slam dunk to the rest of the nation, the NCAA  was unable to find their proof of any profit made from signing autographs. The cheers in College Station could be heard for miles, but stopped for a moment when it was announced that Manziel would still be facing a suspension, even though he was not guilty.

The reason? An inadvertent violation.

The NCAA argued that Manziel did, in fact, sign the autographs and knew that the person was going to resell them for a profit. Because he did nothing to stop that from happening, he was in violation of NCAA By Law 12.5.2.1, which states that after becoming a student-athlete, an individual will be ineligible if they permit their name to advertise, recommend, or promote directly the sale or use of a commercial product or service.

The NCAA and Texas A&M both agreed that a half game suspension in the season opener against Rice would be fair punishment for what Johnny Manziel had done.

A HALF GAME in a game where I’m sure they figured Johnny Football probably wouldn’t even be needed once he was eligible to play. The Aggies won that game 52-31 and Manziel still threw for 3 TDs after halftime.

The NCAA dropped the ball on that investigation. It made them look incredibly bad that they would find no proof of money being accepted yet still “suspended” the athlete on a technicality. It put Johnny Manziel in a position to receive praise that he could rise above the haters (NCAA) and still come to play. It made the NCAA look like they scrambled to hit Johnny Manziel with something, rather than have it seem the who investigation was a waste of time.

Fast forward to the present and Johnny Manziel and the Texas A&M Aggies completed a 9-4 season with a thrilling game against Duke in the Chick fil A Bowl on New Year’s Eve. Since that game, Johnny started to make it clear that he would be entering the NFL Draft. He made Select Sports Group his agent, while marketing/branding company LRMR has been inked to handle his endorsements and off the field branding.

The latter half of that should be common knowledge though. There may not have been a week in 2013 when we didn’t hear about Johnny Manziel at the club with Drake, or exchanging text messages and phone calls with LeBron James. He even went on ESPN Radio SVP & Russillo and talked about meeting LeBron during a dinner he had with King James and Drake in Toronto after a Drake concert.

But did anyone from the NCAA Compliance Office realize that LeBron James, despite his claims, was courting Johnny Manziel to sign with a company in which is not only a partner, but also a founder? A company that specializes in marketing and branding of athletes. A company that is called LRMR.

Of course, before we get ahead of ourselves, according to NCAA by laws, it isn’t a violation for a player to talk to an agent or marketing firm as long as no partnership is discussed or agreed upon. Also, anything purchased, such as meals, would have to be paid for by the individual.

I wonder who paid the tab for the dinners he, Drake and LeBron had?

I wonder what the nature of the conversation was during said dinners?

In addition to that, InsideTheLeague.com reported that two sources told them that Johnny Manziel would sign Texas-based Select Sports Group as his sports agent…on December 12th. I know how unreliable unnamed sources can be, but after seeing the events unfold and Manziel signing with SSG, shouldn’t a light bulb go off in the collective minds of the NCAA Compliance office?

Isn’t it possible that there were meetings and a deal in place before Johnny’s amateur career were over on New Year’s Eve?

If a schlub like me can put these pieces together and ask these questions, surely the NCAA had already thought about it too, right? But remember, the NCAA already got burned once when going after Johnny Football. They looked incredibly bad and took some heat for an investigation that turned up, essentially, nothing. Were they really prepared to launch another investigation? It would look like they had it out for Manziel and that’s something they couldn’t afford.

So it went overlooked.

When you think about this, though, is it really all that shocking? Texas A&M, remember, is an SEC school now.  They are a cash cow. They are in the conference that is partnered with ESPN. They show the money. No one wants to slap that hand, not even the NCAA.

As for reporting it, does ESPN has the professional integrity to try and make waves in the college football world by alleging that a team from their own conference is participating in something that may be an NCAA violation? 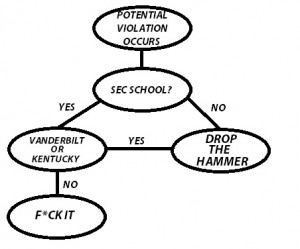 If, however Texas A&M were in the Big 12 still, the dinner date between Manziel, Drake and LeBron might have gotten a few paragraphs on ESPN.com. If they were in the PAC-12, the story may have made the Bottom Line. But if they were in any other conference it would have been turned upside down and inside out. Tell me Mark May wouldn’t have had a field day with that.

To illustrate my point, I have made a very detailed flow chart for your convenience.

It’s no different than any other SEC non-troversy recently. Remember the Alabama player, Dee Liner, who had pictures on Instagram of himself with two friends, posing with wads of cash and the hashtag #StruggleOverWit? What happened there? Didn’t see anything about it on ESPN, nor did I hear of any NCAA investigation into it. The amount of money they had was not what you collect from mowing grass or having any part time job. Yet no one asked the obvious questions to this incoming freshman that was a long time Auburn commit that all of the sudden signed with Alabama and posted a picture of himself with a stack of cash. 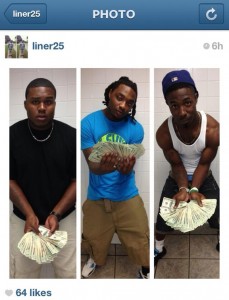 Another incident, about a year ago, involved Ole Miss recruit Laquon Treadwell. Treadwell posted a picture on his Instagram account of him holding a wad of hundo’s. See a pattern? He quickly deleted the photo but like everything else, once it’s on the internet, you’re probably not going to be able to remove it. Nothing else was said of the photo and no one from the NCAA looked into the situation. No explanation was given.

Once again, an investigation by the NCAA could have proven this money to be earned legitimately and we could have gone on our way. Instead, they overlooked the situation and it has been left open for speculation.

Last, but most certainly not least, what about Cam Newton’s scandal? Selling your recruitment? That surely would get blown up by ESPN and the NCAA, but both parties rarely said anything more than what needed to be addressed. Cam’s father Cecil and an ex-Mississippi State player Kenny Rogers sought over $100,000 for Cam to sign with the Bulldogs. The NCAA found that Cam knew nothing of the deal and never entered into an agreement, either in writing or orally, with his father or Rogers to represent him.

Ok, sure, whatever you say. At least they gave this situation a look.

Basically, the NCAA launches investigations when it is convenient for them. Picking and choosing what violations you want to look into is not a way to police the college programs. Hire more people if you have to, but every Instagram picture, new tattoo, expensive car or anything else out of the ordinary should at least be given look. Will most of those investigations turn up nothing? Probably. However, if teams, coaches and players see an influx in NCAA compliance investigations, wouldn’t that be an incentive to maybe straighten up?

For now, though, the NCAA will continue to slap the cuffs on the wrists of those who they can afford to cripple while lightly slapping the wrists of the programs that pad their pockets. And also for now, they will remain nothing but an after thought for conferences that have become to big to fail.