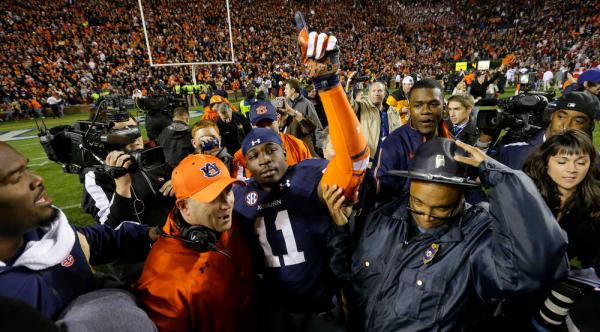 If you told your friends you were betting on the Auburn Tigers before the 2013 college football regular season began, you probably would have been a laughingstock. The lowly Tigers had gone 3-9 (and 0-8 in the conference) in the 2012 regular season, prompting the firing of then-head coach Gene Chizik.

The truth is, the Tigers were downright brutal in 2012, and nobody expected much improvement in 2013. There were new systems to learn under head coach Gus Malzahn, and no star freshmen recruits joining the program to save the day. TopBet.eu sportsbook even had their odds of winning the 2014 BCS Championship at 2,500 to 1 at one point before the season began.

But low and behold, Auburn has defied the football gods and are on the cusp of winning it all after going winless in the SEC just the year before. And just for the record, a modest ten dollar bet on Auburn at the above odds would pay out $25,000, should Gus Malzahn’s boys beat the Seminoles in January.

It’s been one miracle after another for the Tigers this season, and beating Heisman winner Jameis Winston and Florida State would be the last in the unbelievable series of events.

The first was Nick Marshall’s Hail Mary in the final seconds of their game against Georgia, which Ricardo Louis reeled in and took to the end zone to win the game in true underdog fashion.

The next amazing win would come against the formerly number one-ranked Alabama Crimson Tide, who were at the time well on their way to winning a third BCS National Championship in as many years. Chris Davis caught a missed field goal attempt at the back of his own end zone on the last play in regulation time, and brought it all the way home, sealing that Iron Bowl into the hearts and minds of football fans everywhere.

The win was one of the most memorable of the modern age, and a win in the National Championship game would make Auburn’s season one of the greatest Cinderella stories ever in college football history.