Bryce Harper Watched Home Run, Got Hit During Next At-Bat and the Most Anticlimactic Bench Clearing Ensued 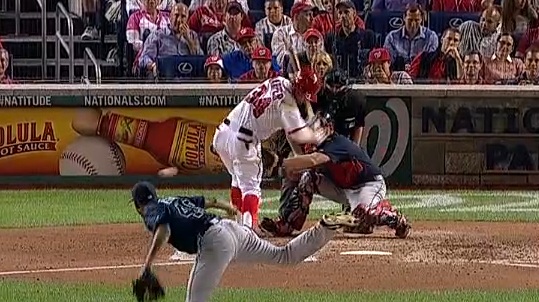 Washington Nationals stud 20-year old Bryce Harper took Atlanta Braves Julio Teheran deep during the third inning.  The home run pushed Harper past Ken Griffey Jr. on the list of players with the most homers before their 21st birthday.  He took a few steps, started to jog and tossed his bat aside, all while enjoying the view of the ball landing on the field turf beyond the center field wall.

Apparently Teheran felt that he took a bit too long and took the opportunity to plunk him during his next at-bat.  What happened after that was probably the most anticlimactic bench clearing I have ever seen during a baseball game.

Ok, maybe it wasn’t the most anticlimactic ever, but with the reaction on Twitter and the mainstream media, you would think Harper went to the mound with his bat in his hand or that Teheran put Harper in a head lock like he was Nolan Ryan.

If that wasn’t enough, the Braves and Nationals Twitter accounts both started beef with each other.

@Braves Which part, giving up the home run, or drilling the 20-year-old on the first pitch his next time up?

Even retired third baseman Chipper Jones took time away from shoving an alarming amount of chew into his mouth to weigh in on the situation.

Don’t walk off homers and u won’t get hit!