Brian Rice, 43, is a Freshman Basketball Player at Geneva College in Pennsylvania

“I knew I didn’t have the discipline to get myself up and go to class every morning,” Rice said. “I just wasn’t mature enough to go to college. I needed to do something else.”

That was in 1987 and he was fresh out of high school.  Also, he had more self-awareness than 99% of the kids that graduate these days.  Instead of college, he decided to enlist in the Navy as an alternative but had no idea he would enjoy military life as much as he did.  He enjoyed the world experience so much that he stayed in the service for 24 and a half years.  While in the Navy, Rice kept up on his fitness and basketball skills by playing in the annual Armed Forces championships in Germany, which would prove vital in his quest to make a lifelong dream come true.

Already an ordained nondenominational minister, Rice decided that is what his life would be post-Navy.  He enrolled at Geneva College in Beaver Falls, Pennsylvania, with a major in community ministry.  Since he was there, he figured he would give college basketball a try.  An opportunity he passed on 25 years ago.

The current coach at Rice’s old high school is the one that tipped Geneva head coach Jeff Santarsiero off about Rice.  He told him that Rice was in great shape and that the two should meet.  Being 6’2″, in shape and having a great personality made it easy for Santarsiero to make a decision about Rice. 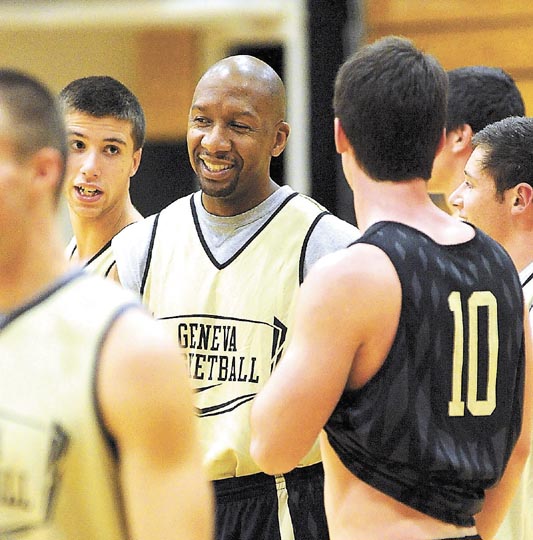 In the first five games of Geneva’s season this year, Rice has played 23 minutes and averaged 1.6 points and 1.2 rebounds and Santarsiero believes those numbers, and playing  time, could increase as Rice picks up the intricacieses of the college game.

Rice says that he sometimes has to ice his knees or get a soak at the local Y but otherwise feels he is able to handle the physical part of the game.

Anyone out there think they can hang with a college basketball team 25 years out of high school?  Hell, I’ll say most of you couldn’t hang 10 years out of high school.  Congratulations to Brian Rice on his stellar career serving his country, his determination in his faith and showing us that our dreams don’t have an expiration date.