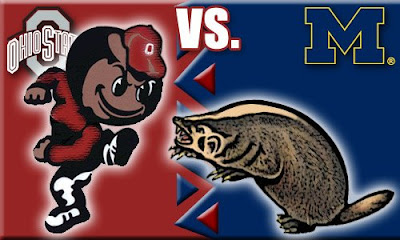 …Although, I bet it seems longer for Michigan fans. 2,000 days, or roughly 5 1/2 years, is the time elapsed since Michigan last beat Ohio State in football. November 22, 2003 was the date of the last Wolverine vitory. With that being said, let’s take a look back at some memorable moments from 2003…

January 2003: OSU over Miami in double overtime for the National Championship (hat tip to Maurice Clarett)
January 2003: The RAIDERS were in the Super Bowl…wow.

July 2003: Kobe Bryant accused of raping a 19 year old hotel employee in Colorado. In 2004, the case would be dropped.

December 2003: The world loses Otto Graham, one of the Cleveland Browns all time greats.

So congrats to Classy Jimmy T and The Ohio State Buckeyes. Keep the streak alive!