On March 20, 2012 at 5:50ish pm, Lollapalooza released their Secret Sale tickets for their 3 day festival in Grant Park in Chicago, IL.  Will history repeat itself this week for Lollapalooza hopefuls?  Last year, the day before they released the deeply discounted $75 3 day passes, they sent out an email saying it would happen that week.  Yesterday, if you are part of their email newsletter, you got that same message letting you know the discounted $200 3 day passes would go on sale on Tuesday, March 26 at 10am CT and the Secret Sale would happen this week.

Seems like a no brainer, right? It’s happening today!

Pump the brakes my little TicketHipster, a name that has been given to ticket trolls on the Lollapalooza message boards by the nerds, it may not happen today.  I was lucky enough to get these tickets in 2011 when they were only $60.  I didn’t realize how lucky I was.  They only release 750 of these discounted 3 day passes and they usually sell out in about a minute.  The best thing you can do is refresh the page continuously until Friday night.  No joke.  Sit there from about 11am ET to about 7pm ET clicking the refresh button.  If you hear about it on Twitter, it’s too late.  If you hear about it from a friend, it’s too late.  The only way you are getting these tickets is to catch it when it happens.  You need luck.

If you are lucky enough to get a 3 day pass to the festival, you may be in for a rocking lineup.  The Chicago Tribune reported this week that Mumford & Sons, The Killers, Phoenix and Vampire Weekend would be part of the headliners.  Usually, there are 6 headliners for the weekend, 2 for each night.  All of those listed, except Mumford and The Killers, are available to play the festival so it wouldn’t surprise me if they were all there.  Both Mumford and The Killers can still totally do it, but it has to agree with their schedule they have for the Osheaga Music Festival the same weekend in Quebec.  Maybe they can ride together. 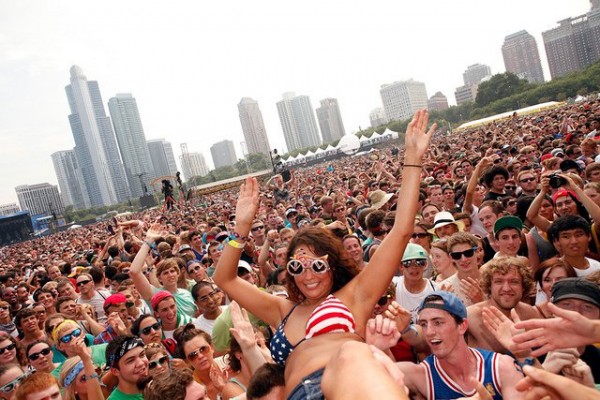 So, assuming those are in-stone headliners, who would the other two headliners be?  Let’s daydream and say Jay-Z might be there.  This would be especially amazing because he will be in the middle of his stadium tour with Justin Timberlake.  They will be on a week break after playing the Rose Bowl July 28th, so it wouldn’t be that much of a stretch to get them to play one night.  It would probably go down as one of the more legendary performances in the history of the festival, even if it is Hova by himself.

Maybe the last headliner could be the Yeah Yeah Yeahs?  Why not, right?  They have been all over festival lineups this year because of their new album coming out in April, so it would make sense to hit the biggest one in the midwest.  Their schedule allows for it too.  As of right now, their last listed show is in Ireland on July 21st.

Other names I have heard thrown around are Skrillex and my personal favorite, The Postal Service.  Skrillex is hard to tell because it seems he is taking a bit of break.  Probably to build the proper shelving for all of his Grammys.  The Postal Service has been adding locations to their tour almost on a daily basis.  What started out as what seemed like a two month, 12-15 date tour has grown into 4 month tour with nearly 40 dates.  They will be in Minnesota the week of the Lollapalooza so a quick jaunt down to Chicago seems likely.  The Flaming Lips and MGMT were also shown on this “leak” from @AgentX who claims they have exclusive access to the lineup.

As for Perry’s Tent, @TheLollaLeaker has been spouting off about Kendrick Lamar, Steve Aoki and Feed Me as headliners for the EDM area of Lollapalooza.  Hopefully, those three will be there and we can get a couple more thumpers like Pretty Lights, Dada Life or Laidback Luke.  The White Panda, Kap Slap and 3LAU would be viable, and awesome, options as well.

All of that is a lot to take in, I know.  But you only have to remember to do two things right now.

2.) Pray that Blur isn’t on the lineup sheet anywhere.