Since 2000, the NFL has had its fair share of problems with their athletes.  A good percentage of the cases are DUI’s or drug related but some of them are special.  And by special, I mean firearm offenses.  Actually, while researching this, it seems as though if the NFL banned nightclubs or strip clubs, total incidents would be reduced by at least 65%.  Was that a “duh” moment?  I am willing to bet that none of these players will be landing on anyone’s fantasy football rosters next year.

When putting together this list, I consulted the U-T San Diego NFL Arrests Database.  It is a wonderful tool that lets you search by player or team to see what trouble they have gotten into.  The list is updated regularly and goes as far back as 2000.  Therefore, the Thunder Treats NFL All Firearm Team is a complete list of the players since 2000 that have been in gun-related incidents.*

Suprisingly, we were able to fill all of the positions except the quarterback and the center.  Of course, if history is any indicater, I’m sure we’ll see those positions filled sooner rather than later. 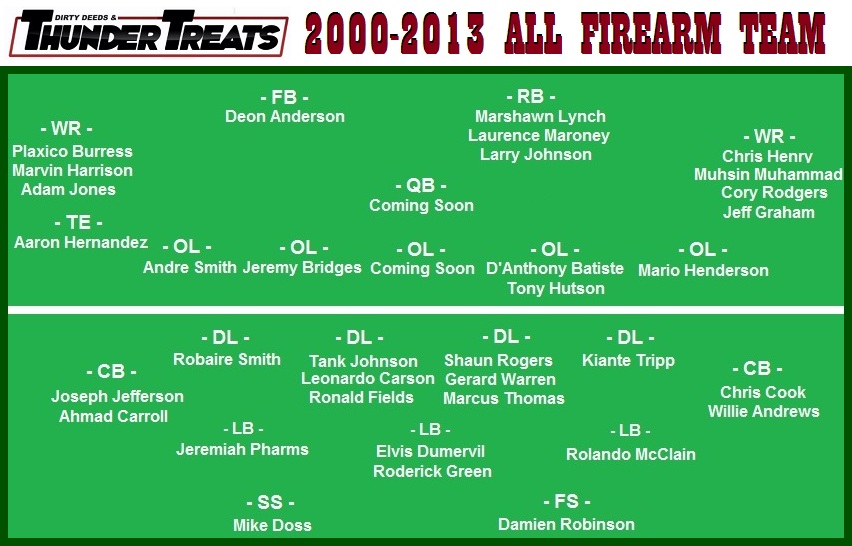 Of course this post will make people chuckle a bit, but it should really be an eye opener.  Before reading this, how many gun related incidents in the NFL could you name?

Also, since we are missing the quarterback and center, who is your most likely candidate to fill in the position?

*I think. Let me know who I missed!