Say it ain't so Ricky!

It comes as no surprise that 18 year old Spanish sensation Ricky Rubio is returning back to Spain until atleast the 2011 season, upon which he can return to Minnesota. I am sure Glen Taylor wishes he had a do over in the draft, just like NFL punters will get this year due to the sheer ignorance of Jerry Jones. Regardless of the facts, they basically wasted the 5th pick on Harry Potter’s twin brother. None the less, this brings me to the Top 5 best “Can we do that one over” NBA Lottery Draft picks since the turn of the Century. 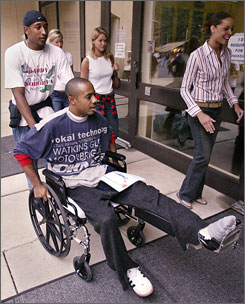 And last but certainly the least…..