Kate Mara vs. Rooney Mara: The Biggest Debate of the Year, Probably

Be honest, put your hand up if you laughed out loud at the thought of Kate Mara vs. Rooney Mara even being a debate? Next, put your other hand up if you cringe when you think of Rooney Mara in The Girl with the Dragon Tattoo.  Now that you have both of your hands up, I can only hope you are at a library or work because I’m sure you look like an asshole.

This whole debate came about on Twitter between myself and DiNunz when I retweeted the picture below the Mentality Magazine posted of Kate Mara.  I thought at first DiNunz was kidding, but I soon found out that he was very serious. 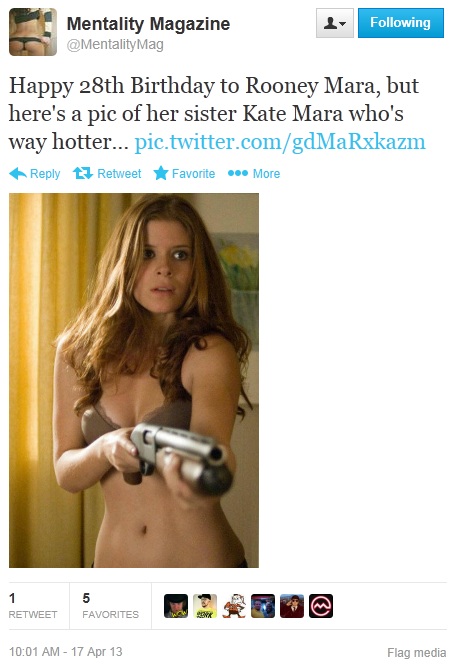 A Kate Mara vs. Rooney Mara bet was made.  As is standard practice at Thunder Treats, when a bet is proposed to someone, the terms are always such that the loser must provide the winner a $20 gift certificate to a dirty restaurant.  After reading through the argument, or not, vote on the right hand side of the page for who you think is hotter, Kate or Rooney.  Polls close Sunday night!

So here we are.  DiNunz is up first with his argument for Rooney Mara.  I will follow with my rebuttal which in turn will be followed by rebuttal from DiNunz and then our closing arguments.  At that time, we will leave the voting to you to decide which sister is hotter.

Patricia Rooney Mara came gently and quietly into this world on April 17th, 1985. Her mother was quoted–for purposes I’m making up for this debate–as saying “Rooney gave me no pain, during her labor or birth.”

That’s one awesome, passionate and considerable person. And that’s something that has continued into her young adult life, where she has blossomed into a truly talented and beautiful women. When comparing true beauty between her and that of her OLDER sister Kate, many factors and achievements in life can and should be considered.

First of all, how about something like education? I personally can’t think of anything hotter than a women who has drove herself and worked hard toward an excellent education. Rooney is a graduate of NYU, a prestigious and excellent institution of higher learning. As for the google search conducted by myself today, I was unable to find any history of Kate Mara’s higher education.

But after moving past education, nothing fills my boner up more than a women who rolls up her sleeves, gets a little dirt under her nails and is willing to give back to mankind. Look no further than Rooney Mara, who started the Uweza Foundation, in 2006. A foundation that provides housing, food, and medical care for people living in the Kibera slums. A foundation she is the president of to this day. I challenge you to name something hotter than a women president? I’ll help you out, the only answer is a dutchess, and Kate is no dutchess.

When discussing the hotness between two young women in today’s digital age, I find no better outlet than the Internet. On the World Wide Web no person is more respected in the value of ranking a women’s physical hotness than the amazing and talented Mr. Skin. And while visiting his lovely site, you will find rankings. Rooney Mara celebrity ranks as a 3 out of 4 star. A ranking labeled as “great nudity”. While Kate comes in with the sites lowest rank… 1 star. No nudity. How very disappointing. A fact even further made obvious with the level of their individual work as actresses. Kate Mara, even with an 8 year head start in the profession of acting has yet to even been nominated for a lame ass Saturn Award, while Rooney has received award nominations for best female lead from The Academy Awards, Golden Globes, and even the before mentioned Saturn Awards.

No matter if it be stealing scenes in The Social Network, battling for survival against Freddy Kruger, or showing the acting chops to totally transform for her role in The Girl with the Dragon Tattoo it has been proven by Hollywood and it has been proven by Mr. Skin. And now today, it will be proven to DiLo that Rooney Mara is a HOT leading lady.  It will also prover her OLDER, character actress (currently in a Netflix series) sister, Kate, does not hold a candle to the brightly burning sun that is Rooney.

Kate Mara was born on February 27, 1983 and is currently 20 years old because if Jay-Z taught us anything, it’s that 30 is the new 20.  Also, according to my both handsome and expansive resources, February 27th is the day of the year in which the most talented, beautiful, energetic and smart of any two sisters is born.  So that kind of ends the argument right there, doesn’t it?

But since I love rubbing DiNunz’s face in the dirt, I’ll continue on to win my $20 dirty restaurant gift certificate.

I love the fact that DiNunz brought up education, more specifically, the drive to work hard to excel in education.  I think that could be measured by graduating high school a year early and being accepted in NYU’s prestigious Tisch School of the Arts, don’t you?  She was so far along in her journey by the age of 17 that she deferred their acceptance for three consecutive years because of her acting and singing.  Not too shabby.

Unfortunately, my Google machine didn’t return the best results when I was searching for a foundation or charity that Kate Mara is part of.  There is a good excuse for this, though.

If Google wasn’t broken, it would have told you how instead of being selfish and committing herself to one charity—and appointing herself President no less—Kate spreads her love by supporting numerous charities and foundations by attending their fundraisers.  She just wants to give and not be the center of attention to which you cannot fault her.

The fact that Kate doesn’t slut it up and Rooney does is an argument?  Sorry if Kate doesn’t feel like it’s necessary to flop out her sweater dumps to impress or get a part.  She isn’t a slut and that is definitely something that shouldn’t be held against her.  However, she isn’t some prude either.  I seem to remember a nice little scene from Nip/Tuck where she was tongue raping Sofia Bush.  Nudity? No. Hot? Hell yes.

Unfortunately, the blind people in Hollywood have yet to give Kate Mara her recognition in the form of an award but I could say the same thing about Rooney since the only awards she won by herself were from the NBR and the Santa Barbara International Film Festival.  What are those? No one in Santa Barbara even knows.  The other awards were for “ensemble of the year”.  Yay.  That’s like getting a participation ribbon Vacation Bible School. Bravo.  The award argument is a moot point because no one puts nominations on their mantle, even though I’m sure Rooney has tried.

I don’t want to lose a friend over this argument; I just want a $20 gift certificate to a dirty restaurant.  Is Rooney a little attractive? Sure, I guess, but that is only because she is sporting the same genes as her big sister.  Kate has done her due diligence in the industry and worked hard.  That little Netflix series you mentioned was the most watched piece of programming on Netflix after its release and is going to transform the way we watch television.  It has also led to another season and even a new movie, Transcendence, where she will star alongside a little guy named Johnny Depp. Burn.

Playing second fiddle to Johnny Depp is quite an impressive accomplishment, but I think you bring it up more for the fact Johnny Depp is better looking than Kate, than as something to be impressed by. But even if you wanted to go that route, Rooney one ups Kate in that department too. Ya know, since she’s busy being the lead in a trilogy with James F@&$ing Bond. You’re grasping at straws here if your big point is having to resort to calling out her looks in GWTDT. That’s a movie role, make believe, Dilo. Why try to use that in an argument? Because hot actresses never go ugly for a role, and we should always remember them as looking just like that? Maybe you are right, remember that hag Charlize Theron in Monster?

A lot can be said for both women now that it is all said and done.  What I would like to point out is that Kate is just more attractive than Rooney.  Hands down.  And that, my friends, is the argument that started this whole charade.  I wouldn’t argue that Kate is the better actress, so why would you argue that Rooney is the more attractive sister? Be true to yourself.

And finally, if my opponent really is against hot girls in their twenties getting naked in movies, it’s obviously clear to question his judgement in matters such as who’s the hotter sister. Vote for Rooney.

The restaurant you buy this gift certificate from better have, at least, 3 health code violations.