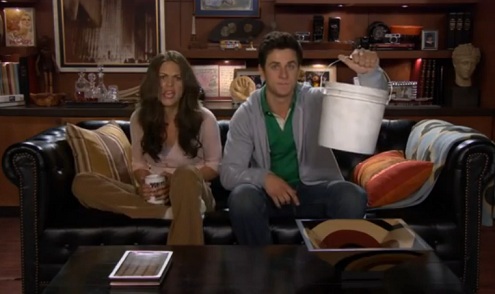 How I Met Your Mother creators Craig Thomas and Carter Bays are planning on going out with a bang.  Or, rather, a wedding.  In the ninth and final season of the hit show, it was revealed at Comic-Con that instead of being introduced to Ted’s (Josh Radnor) wife during the finale, we would get to know her throughout the season.  Also, apparently the setting for the season is at a wedding where storylines will flash back and flash foward.

“We have this new framework for the season,” said Bays. “The structure is telling a story at the wedding but will flash back and forward, decades will span in course of this one weekend.”

How I Met Your Mother debuts on CBS on September 23rd.  Until then, enjoy the video they dropped at Comic-Con that features Ted’s kids (Lyndsey Fonseca and David Henri) finally having enough from future Ted and going off on him.  I am sure a lot of you have felt the same way about this show at one time or another.