Whoa.  Amanda Bynes had herself an interesting night.  A man reportedly called the cops (narc) after he witnessed Bynes smoking a joint in the lobby of her apartment.  When the cops arrived to see what was up, shit went south in a hurry.

According to reports, the police observed a bong on the counter in her apartment and when asked about it, Bynes flipped out and threw the bong out the window from her 36th floor apartment onto the street below where pedestrians were walking.  Immediately, obviously, Amanda Bynes was arrested for reckless endangerment, possession of weed and tampering with evidence.

The first treat we got from this whole ordeal was her mugshot in which she somehow channels her inner Jonathon Brandis (RIP) from The Neverending Story II.  Of course I have a visual.

As if she hadn’t given the internet enough to get through the weekend already, she showed up this morning to court in shocking fashion.  She had somehow switched characters from The Neverending Story II’s Bastian to the giant, flying dog thing, Falcor.

Annnnd, if that wasn’t enough, she told the court that her bong was a vase.  I cannot make this stuff up.  I really hope Amanda gets the help she needs and gets back to being a smokie pie sooner than later.  I miss her.

UPDATE: @Dinunz read this and pointed out that Lindsay Lohan is also just as screwed up as Amanda Bynes and therefore she needs her part in the Neverending Story franchise…Which one? 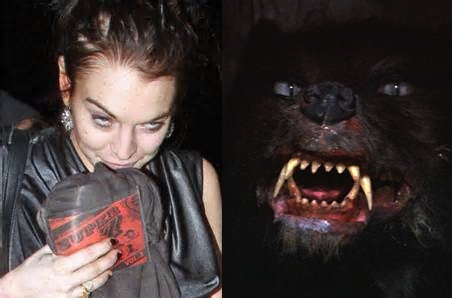