TJ Lane, the boy who terrorized Chardon High School in Northeast Ohio last year, will spend the rest of his life in prison.  On February 27, 2012, Lane opened fired on his classmates, killing three and injuring three others.  He was found shortly after the rampage, sitting on the side of the street in a t-shirt emblazoned with “killer”.  He was taken into custody without incident.

Today was his sentencing and, like that day over a year ago, he was wearing a shirt with the word “killer” on it.  He seemed completely detached and it is clear from his statement, and actions, he made towards the victims families, he has no remorse for what he did. 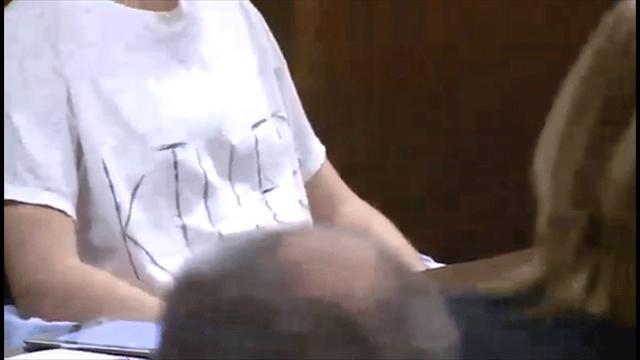 If that wasn’t bad enough, after his sentence was read he gave only one statement.

This hand that pulled the trigger that killed your sons now masturbates to the memory. F— all of you

Afterwards, Lane sat smirking and smiling while family members of the victims gave statements.  All mostly calling him a monster and hoping for nothing but the worst for him.

Judge David L. Fuhry noted the lack of remorse as motive for such a strong sentence.

If it were my son that this kid put in the ground, he wouldn’t have made it out of that court room alive.  The only comfort those families can take now is knowing that this boy won’t be alive much longer.  My best guess is that he is killed in prison by an inmate or he kills himself.  Either way, I hope it is long and painful.