Like last year, we did it live again and it was another successful shit show. This year, you can actually hear the music changing ever minute. We did it to a 90’s mix we found on PowerHourZone.com. Also, be warned that this is the raw audio from an hour long of drinking. I’ll go ahead and slap a NSFW tag on this.

DiNunz came ready with great topics for the hour. For example, one of his questions was which Nickelodeon show would you rather win, Guts or Legends of the Hidden Temple? Both are great shows, but only one can be the winner. Another question he posed was would you rather have the ability to fly like Superman or be invisible? This also caused some drunk arguments. 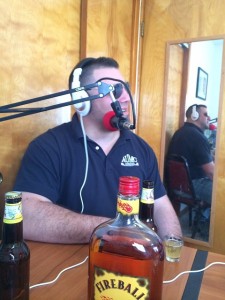 Big Monk brought things up another level with a bottle of Fireball, which was shot despite claims that we would never do that during a power hour. DiNunz had the great bright idea to make me, the only single one of the group, call a girl and ask her to go steady, which led to an amazing voicemail after DiNunz was unhappy with my choice.

It may get overwhelming annoying at times, but I suggest listening to the whole thing. You may end up having to do it in parts because we do tend to get loud, but it’s worth it. If you just want to hear us drunk, fast forward to the 35 or so minute mark and listen from there.