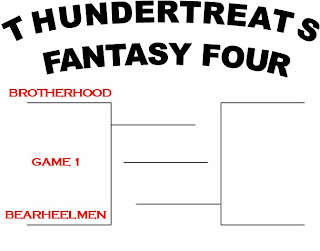 It is almost NCAA Tournament Time and I thank Uncle Buck for Tourney preview. But who wants to talk about the real tournament when we can talk about the fantasy four that I came up with. I have decided to put together a mini tournament of my own. I sat down and started thinking about NCAA basketball player of the 1990s and early 2000s that I grew up watching. Once I remembered everyone cool that I could think of, I began trying to place them on teams. Now, my citeria was pretty simple, I tried to pick dudes I remembered that did not quite make it at the next level. Some guys obviously have and continue to have success in the NBA but most of the guys had a cup of coffee at best in The Association. I tried to get a starting five and a sixth man for each team, but not every team has six so I need some viewer imput to help me finish out the rosters. Here is what I came up with for teams and players. Let the Fantasy Four Begin!

Botherhood (As you can probably derive from the team name, these guys are brothers who both played college ball). This team is led by the Capel brothers. Jason was a standout guard at Duke who has gone on to become quite the basketball coach. His younger brother Jeff decided he did not want to follow his brother to Durham so he instead went 8 miles away to a school in Chapel Hill called North Carolina. I guess these two schools are bitter rivals. The second group of brothers that made the squad actually played together. Who can forget the O’Bannon brother from UCLA. Charles and Ed helped UCLA have success in the NCAA tournament while they played at Pauley Pavilion. The last set of brothers came from a very large, athletic and talented family that littered five D-I basketball players all over the country. Of course I am talking about the Duany Brothers. Kueth Duany played for Syracuse and was part of the 2003 National Championship team. His older brother also made a Final Four while playing for Wisconsin. His name was… ahhhhhh…. I think… I can’t remember… wait……….. O yeah, thats right, his name was Duany, wait, what was his first name? Duany. I thought that was his last name. That’s right DUANY DUANY. Unreal.

BearHeelMen (These guys played at the same university and for some reason or another both hold a special place in my heart). The team starts with two solid Tar Heels. Joe Forte was Carmelo Anthony before Carmelo Anthony was Carmelo Anthony. Joe was ACC rookie of the year and followed that up by player of the year. He left after two seasons and was drafted by the celtics before two other guards you may have heard of, Gilbert Arenas and Tony Parker. Forte is joined in the backcourt by Easy Ed Cota (Dickie V is Nuts). This guy was as smooth and solid as it gets. Google Ed Cota and you will be amazed at some of the things this guy accomplished. I don’t know anyone who didn’t have an Ed Cota jersey growing up. The second set of teammates takes me back to when UMass was a national power. It may have only been for a few years but these two backcourt mates were one of the main reasons UMass was able to make a solid run. I am talking about Edgar Padilla and Carmelo Travieso. Now these two had some help with a big man named Marcus Camby and John Calipari as coach but I loved watching these two run that team, distribute the ball and tickle the twine from deep. The final two come from the great state of Ohio. Cincinnati brought us Steve Logan aka DMX. This guy was a stud in high school and was pretty good when he got to UC as well. DMX, I mean Logan was an excellent scorer from the point guard position. Another Bearcat that was maybe my absolute favorite to watch was none other than Melvin Levett. That’s right. Get excited. THE LEVITATOR has arrived. This guy was a high flyer and when he got on a shooting streak he was nearly unstoppable. Wearing that fresh 21 Bearcat Uni and a clean pair of J’s. Loved it.