He Did the Crime, Paid the Time, Now Let him Shine 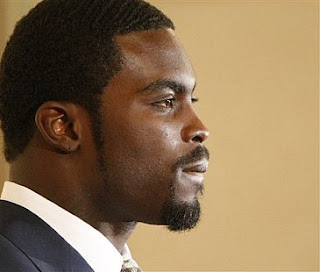 Michael Vick completed his 23-month federal sentence for operating an illegal dog fighting ring on Monday and now looks to re-enter the NFL. Roger Goodell said that he would wait until he had completed his sentence before ruling on a possible reinstatement to the league. A lot of people are going back and forth on this subject saying that what he has done is unforgivable. I say that he has done his time and paid his debt to society. I think that Michael Vick has done more than anyone other athlete has in paying the price for his actions. The dogs that were involved are all now in loving homes and the ones that could not be released are living in a ranch in Utah. This ranch was part of the approximately $900,000 that Vick paid for the lifetime care of the dogs. In this day and age, you would be hard pressed to find another celebrity/athlete that has committed a crime and has served their time for it. Just look at Cleveland Browns WR Dante Stallworth’s sentence for KILLING A MAN while under the influence. He got a 30 day prison sentence and an undisclosed amount of money paid to the victim’s family. Oh ya and he was released after 24 days served! So, Michael Vick kills dogs and he gets 2 years, Stallworth kills a person, a father, and gets 24 days? Obviously our judicial system needs as much work as our economy, but this is just ludicrous. I understand that people will protest if their team “takes a chance” on Michael Vick, but it’s the NFL where the fans are maniacs. If he starts winning like he knows how, those protestor groups will begin to thin out. I say if Michael Vick can help your team, sign him. What do you have to lose, another season perhaps (i.e. Cleveland, Detroit)? At the very least take a chance on him, where else are you going to get a pro-bowl quarterback for pennies?