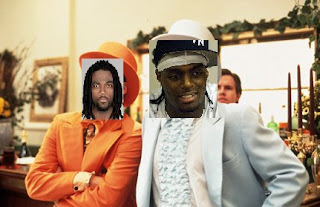 I don’t even know where to begin with these two morons. I will not refer to them by their full names because they don’t deserve that honor. Plax shot himself and Donte killed a guy. Let me repeat that, DUDE KILLED A GUY!!!!!
Plax decided last year that his bodyguard wasn’t enough protection when he went out to Da Club, so he strapped a piece to his sagging drawls and hit the streets. The night ended abruptly when the retard shot himself. Now, he is still trying to play this NFL season while his lawyers play around with the legal system to by him time. Now I know there are two sides to every argument but I really don’t care. Facts are facts.
In Donte’s case the facts look something like this. Went out on South Beach to celebrate getting his multi-million dollar signing bonus, partied til 7am, drove off in his bentley with a .126. Hit a guy in the middle of the road.
People make mistakes, but to kill a guy with your car and plead guilty and get 30 days in jail, seems unfair to me.
I have decided that the legal system is a waste of our time. So, I think we should come up with better punishments for these two.
For Plax, I say since he shot himself in the leg, maybe his punishment should be we shot him between his legs. That will teach him a few lessons. Lesson one, he will learn his proper pant size and he can use a belt for the proper reason. And two, he will learn why you don’t play with guns. They hurt people. Anytime you threaten MR. JOHNSON, guys pay attention.
Donte, I got a few ideas for him too. One, no more haircuts. He should have to wear those dreads for the rest of his life. Two, bye bye bentley, hello woodywagon. If you got a better punishment let me hear it. I can’t believe these two clowns are going to be on the football field this fall.