Grant Reed is a Buckeye fan.  He got that way because 1.) he is obviously gifted and 2.) His parents, Troy and Denise, were members of The Ohio State University Marching Band.  Along with his brother Collin, Grant and his parents are all diehard Buckeye fans.

That was never more apparent than two years ago when Grant was diagnosed with a brain tumor.  A tumor which Grant referred to as “Michigan”.  On Friday, Grant took down that team up north and was treated to a well-deserved send off from the Nationwide Children’s Hospital in Columbus.

The doctors say the prognosis for Grant is a good one.  Although, he will have to return to the hospital every three months for check ups.  He also suffered some setbacks with his speech and mobility.

“We’ve beaten Michigan for the short term, but like any rival, there’s a chance it can come back,” his father said. 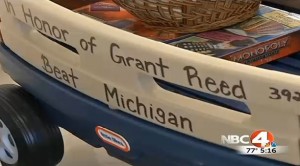 Before leaving the hospital, Grant and his brother Collin donated two wagons to the incoming patients as part of the Buckeye way to pay it forward.  Their father Troy had only one stipulation for the gifts.

It had to say ‘Beat Michigan’ on them.

Go Bucks and congratulations to Grant on whoopin’ Michigan!